skip to main | skip to sidebar

I have been blogging FOUR (Yes 4!) different blogs about soccer over the last year. There is GOALKitsap, GOALTacoma, GOALSeattle and also the Examiner blog on Examiner.com.

This is about to change.

While I am not closing the GOALKitsap and GOALTacoma blogs for good, they are going to go on hiatus when it comes to covering the Kitsap Pumas and Tacoma Tide FC.

The NEW place to find my blogs about Tacoma Tide FC news is in the centralized GOALSeattle.com blog, right HERE.

Contact me! David Falk goalseattle@gmail.com
Posted by GS-1 at 9:01 AM No comments:

The United Soccer Leagues today released information about the 2009 structure of the Premier Development League (PDL).

The eye-opening development is that Seattle is listed as a club competing along with Tacoma Tide and the new Kitsap Pumas next season.

Seattle (as well as Kitsap) both have a "TBA" (To be announced) listed after their names:

It is not yet known who will be running the Seattle club. Will it be Sounders FC, since MLS recently disbanded its reserve league? Could it be Seattle Wolves FC, who hope to join the USL Second Division in 2010? The Wolves have previously told me that they will be in the Pacific Coast Soccer League again in 2009, but perhaps after the recent league meetings this has changed.
Posted by GS-1 at 6:19 AM No comments:

The Tacoma Stars started the Greg Howes era with a 7-3 win over the Snohomish Skyhawks at the Soccer Center in Tacoma Saturday night.

Despite the win, Stars coach Greg Howes saw a lot of improvement that needed to be made by his squad if they are to be serious contenders for the PASL Premier National Title.

Next up for Tacoma is another home match against the Central Oregon Steelheaders on December 13 at 7pm. Tickets are $5 for adults and the match will be held at the Soccer Center in Tacoma.

Read the match details here.
Posted by GS-1 at 8:35 AM No comments:

TACOMA STARS VS SNOHOMISH SKYHAWKS
COME CHEER ON YOUR TACOMA STARS AT THEIR FIRST HOME GAME THIS SATURDAY, DECEMBER 6TH @ 7:00PM DOORS OPEN @ 6:30.
TICKET PRICES: ADULT $5.00, YOUTH (11-18) $3.00, FAMILY PASS $13.00 (2 ADULTS & 2 KIDS), CHILDREN 10 AND UNDER ARE FREE
**NEW THIS SEASON**
STAR BAR - ALL PROCEEDS FROM THE STAR BAR WILL GO TO
SUPPORT THE TEAM. STAR BAR WILL BE LOCATED ON THE SMALL FIELD.
JOIN THE TEAM FOR THE AFTER PARTY IN THE STAR BAR!
DOYLE'S PUBLIC HOUSE (208 SAINT HELENS AVE TACOMA, 98402 -253.272.PINT)
WILL BE OFFERING A BEER SPECIAL FOR ALL TACOMA STARS FANS BEFORE THE GAME.
PURCHASE ONE PINT OF BASS ALE THE DAY OF THE GAME
(UNTIL 6:30PM) AND RECEIVE ONE FREE ADMISSION INTO THE STARS GAME.
THE SOCCER CENTER WILL BE ACCEPTING NON-PERISHABLE FOOD DONATIONS FOR NORTHWEST HARVEST DURING THE MONTH
OF DECEMBER. ANYTHING YOU CAN DONATE WOULD BE GREATLY APPRECIATED!
Posted by GS-1 at 3:21 PM No comments:

'Waite' is over in Kitsap; Pumas will prowl Bremerton in 2009 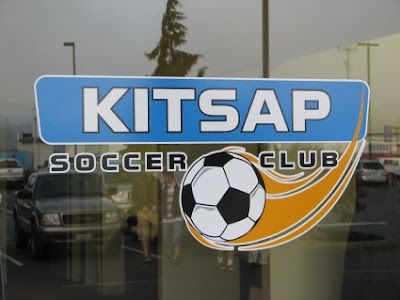 Bremerton, WA - The Kitsap Soccer club today announced fans have voted in the club name "Pumas" for the team that will kick off its first season in 2009.

Lucita Flores-Alvarenga, who voted for "Pumas" in the recent online name the club contest, was on-hand to receive the first two season tickets in club history. The announcement, held at the club offices, was attended by Bremerton Mayor Cary Bozeman, city council members, local soccer officials, fans, media and businesses. 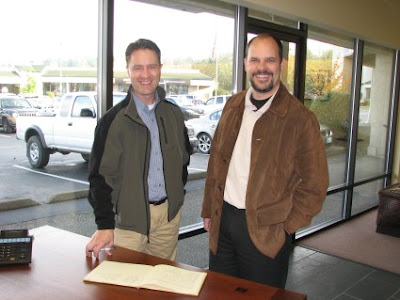 Guests sign book as they enter before the announcement.
The club colors of blue, black and gold were displayed using a new logo for the club's mascot, "Pedro the Puma." An official club logo will be designed by Sungrafx of Silverdale, WA, and will be announced at a later date. The club will wear jerseys 'hooped' with blue and white, and blue shorts.

Shortly after the announcement the club sold its first six season tickets.

Talk about the club & the name "Kitsap Pumas" in the GOALKitsap Forums! 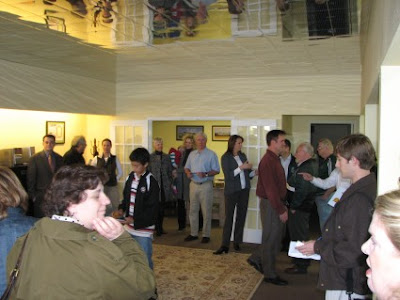 Owner Robin Waite and club Executive Director Ben Pecora spoke to the audience about the journey to founding, and then naming the club. Waite revealed hopes to host a "Kitsap Challenge Tournament" next season at the club's home, Bremerton Memorial Stadium. The tournament would feature out of state competition playing the Pumas.

Waite and Pecora are leaving in a few days for the United Soccer Leagues annual meetings. There the club will build its schedule and network with other clubs. 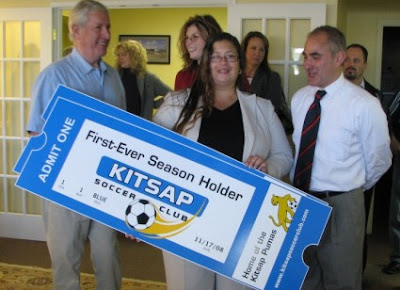 Robin Waite first looked into bringing professional soccer to West Sound back in late 2005. It was a bit less than two years after Seattle Sounders co-owner Adrian Hanauer's initial bid to bring Major League Soccer to Seattle had been edged out by Real Salt Lake and Chivas USA. As one of the owning 'partners' of the United Soccer Leagues Sounders, Waite was given permission to explore moving that club to Kitsap County. Initially Waite looked at the Kitsap Fairgrounds stadium site for a possible move. The county even spent money to look into design ideas to make the rodeo and car derby venue work for soccer. 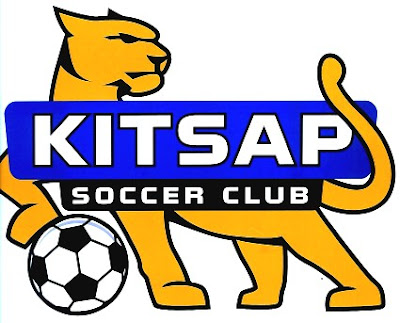 Not the final logo: This is the mascot, Pedro the Puma. Waite says the final club logo might honor Chief Kitsap.
Later Waite took his search to Poulsbo, where he commissioned a stadium design on land he owns near the Wal-Mart complex and a satellite Olympic College campus. (See the GOALKitsap Museum page for more on this.) While Adrian Hanauer was successfully teaming up with new investors to bring MLS to Seattle, and thus doom the USL Sounders to extinction, Waite turned his focus to the largest city in Kitsap County, Bremerton. There he found willing city and school officials and a centrally-located venue in need of some TLC. Memorial Stadium has long been the home of the Bremerton High School Knights and the Olympic College Rangers. It has also seen semi-pro football when the West Sound Orcas played there a few years back.

Waite has been dealing with USL officials about how to 'transfer' the existing Sounders franchise while at the same time talking with Bremerton people about using Memorial. Waite's ambitions were high from the start: he wanted the USL Sounders to come over as-is and play in the top level of the league. That became a tough sell among other USL First Division club owners, some of whom reportedly balked at the idea of Kitsap being 'major league' enough for the still-minor league USL-1. In the end the league decided to grant Waite a Premier Development League (PDL) franchise in the third level of the league structure. Waite immediately went on record as saying his goal is to move the club up to the next-highest level (USL-2) as soon as other clubs on the west coast are ready to join the same division. 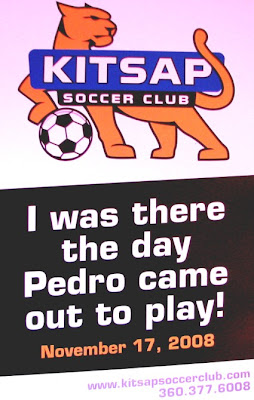 It's been quite a wait for both Waite and the Kitsap soccer fans who have been following the saga for over three years. In 2009 Seattle Sounders FC will kick off in Major League Soccer at Qwest Field. A few minutes west by air, but an hour by ferry, the Kitsap Pumas will also debut. Tacoma Tide FC sit ready to take on the Pumas in the 'Narrows Bridge Bell' rivalry cup next season.

Around the Sound of Soccer for November 13th

The Youth Media Institute in Seattle produced this soccer PSA.
It continues to amaze me that there is enough (pro) off-season soccer news in the Puget Sound area to run and have frequent content on three area blogs. Just this week Tacoma Tide FC published another player update and then issued a new 'toolbar' for supporters to use on their web browsers as a way of supporting the club.

Over in West Sound Kitsap Soccer Club will reveal their name, crest and club colors on Monday November 17th. GOALKitsap.com got a sneak peek at the colors and updated its look.

Seattle, HQ for the "Sound of Soccer," continues to churn out the news. Sounders FC held their first open tryouts in Spokane last weekend. This week the MLS club announced they will be debuting their new uniforms at a benefit fashion show on December 4th. The club website also took a look back at the first year of developing SSFC, and visited with GM Adrian Hanauer.

Beyond the pros, the college seasons are heading towards their playoffs. The Seattle Pacific Women and Western Washington Women will be in Seattle (Interbay) for the West Regionals the 13th-15th.

The Washington Women will be in Texas this Friday to play LSU in the NCAA's.

In North Sound, Matt Pele was named GNAC Player of the Year for Western Washington's Men, and Viking head coach Travis Connell was awarded Coach of the Year honors.

In South Sound the UPS Loggers Women earned a bye into the playoffs and will host a match this Sunday.
Posted by GS-1 at 8:14 AM No comments:

From Tacoma Tide FC:
We are thrilled to share with you our Tacoma Tide F.C. Toolbar. It will serve as a new way to generate revenue. With this Toolbar we will raise much needed funds for Team Travel & Club Development, and you don’t have to pay anything!
This Toolbar will not replace your existing toolbar. The features on the Toolbar are all designed to help us raise funds in a non-intrusive way. Also, it is designed to make your life on the internet easier. THERE IS NO COST TO YOU. There are no pop-ups, adware, spyware or tracking and we also respect the user’s privacy. It is easy to download…just click on the link below.
CLICK HERE TO DOWNLOAD YOUR TOOLBAR
(you may have to hold CTRL while you click on the link. )
· Whenever you do an internet search initiated from our toolbar and click on a sponsored link amongst your search results, the Tacoma Tide makes $.10 for that click; with no purchase necessary.
· The sponsored links are anything listed in the shaded area with bullet points or anything listed on the right side of the page. (see example below)
· These organizations pay to be in these spots and want you to click on their site to get information from them; they pay to be there because they want the traffic and exposure. You pay $0.00
Performing 2-5 searches a day on something you are interested in and clicking on sponsored links, because those links help you with the information you are looking for, will help us reach our goals faster! This should only take 5 minutes. It’s that EASY!
The Tacoma Tide F.C. is proud to have you as a Supporter! We hope you are equally proud to have our toolbar on your computer. Please feel free to share this toolbar with your friends and family so they can help the Tacoma Tide organization continue to better soccer in the Puget Sound.
So…
1. Download the toolbar.(quick & easy)
2. Search from the toolbar.(type in whatever you’re interested in)
3. Click on the sponsored results. (no purchase needed)
4. You have just raised money for the Tacoma Tide F.C. ! (for FREE)
THANK YOU FOR SUPPORTING THE TACOMA TIDE FOOTBALL CLUB !!! David Falk has been following soccer in South Sound since the early days of the Tacoma Stars. He's now the webmaster at www.GOALTacoma.com.